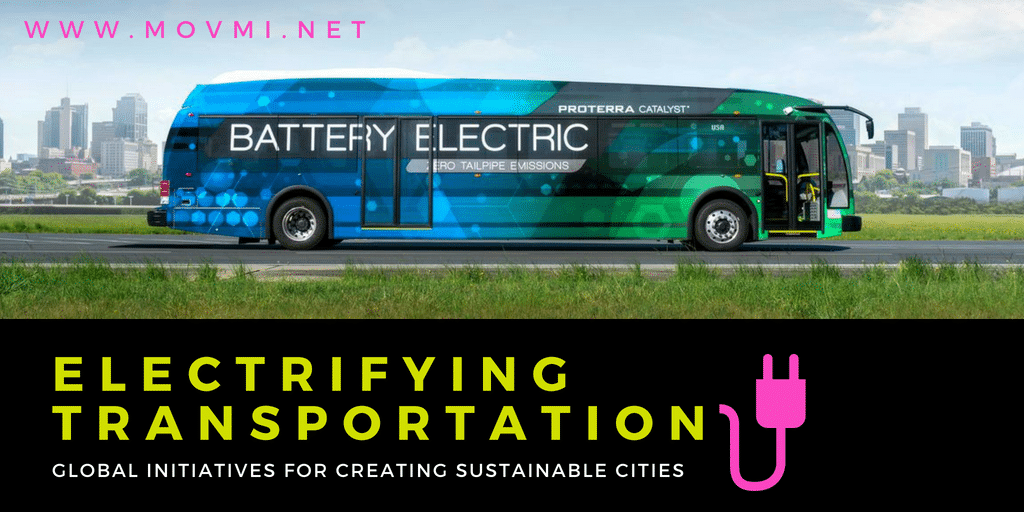 One of the biggest hurdles currently taking place in the transportation industry is achieving higher levels of sustainability through electrifying transportation. A long-term goal for many countries and companies is to switch to 100% renewable energy resources, and we are seeing many already moving away from using fossil fuels. So, what’s happening in electric transportation. Read on for a quick review, and check out this blog post more on sustainable cities that are using electricity within their shared transportation.

WHAT IS AN EV?

An EV is an electric vehicle that is powered by an electric motor instead of a gasoline engine. It uses energy stored in its rechargeable batteries, which are charged by common household electricity. The electric motor gets energy from a controller, which regulates the amount of power— based on the driver’s use of an accelerator pedal.

The idea of an electric vehicle is not a modern concept. The first electric car was built in 1837 in Aberdeen, Scotland and the technology enjoyed such success that electric battery-powered taxis were even introduced to the streets of London and New York late in the 19th century. As gasoline prices dropped, however, their popularity did not last very long. However, with modern developments in technology and the world becoming more conscious of the environment, electric vehicles are back and are taking over the auto industry.

With the promise of government ‘bans’ on internal combustion engines and a ‘phasing out’ system in place within most of the world’s leading cities by 2025-2050, all major carmakers have hurried to roll out plans, detailing how they aim to electrify their vehicles:

A Bloomberg New Energy Finance report suggests that that the sale of electric vehicles will hit 41 million by 2040, representing 35% of new light duty vehicle sales. This would be almost 90 times the equivalent figure for 2015.

While electric cars are still only as green as the electricity used to power it, they are still far better for the planet than conventional cars. Even if the process for producing the electricity for EVs increases CO2 emissions, the vehicles themselves produce no tailpipe emissions, they reduce dependency on oil and are cheaper to operate than combustion engine cars, overall reducing our carbon footprint. 95% of the energy generated by an electric car is put into motion, whereas the internal combustion engine is only 30% efficient – the rest of the energy being lost as heat or noise.

Electric cars are more expensive to buy than a conventional car – at least for the time being. However, there are various incentives and government grants that can counter this. Grants of around €4,000 are available across Europe for those thinking of making the move.

The cities leading the way in sustainable living across world are encouraging a transition into renewable energy, not just to power buildings and homes, but to also power public transportation and mobility, using natural resources, the wind and sun.

An example of this is Los Angeles. In 2028, when the city hosts the Olympics, most of the electricity will be provided using renewable energy. Public transit and technology will be integrate to allow visitors to use apps, which will seamlessly navigate their journey between rail, electric buses, and electric autonomous ride sharing cars and shuttles. Also, the metro commuter rail is all-electric and will also be powered completely by renewables.

Costa Rica is on its way to becoming the first nation in the world to be powered completely by 100% renewable energy. Costa Rica already generates over 99% of their electricity through renewable energy, and went 300 days on clean energy in 2017. The next step in the country’s plan is phase out the use of all fossil fuels in the transportation sector.

In June, on World Environment Day, Costa Rica launched an initiative on the electrification of buses. Second, on June 5th, on World Environment Day, we launched an initiative to electrify buses. Latin America has the highest number of people in the world using public transit. This means that the electrification of buses is a very important step towards a sustainable future for the country. One major goal is to have safe paths for bikes across the country. It’s about democratizing the streets and ending the reign of the private, convectional car.

We are excited to continue to watch electrifying transportation grow and being a part of the transition to renewable energy sources in moving people around their cities. Even if we electrifying all transportation and use renewable energy, we need to ensure we are sharing our trips and means of transportation, otherwise we haven’t solved traffic and congestions issues. For more insights from Monica Araya, check out our Women in Shared Mobility series where we interviewed her. Interested in join the next series? Contact us to nominate yourself or someone you know!