3 Reasons Why Switzerland Could be the Leader in Autonomous Vehicles 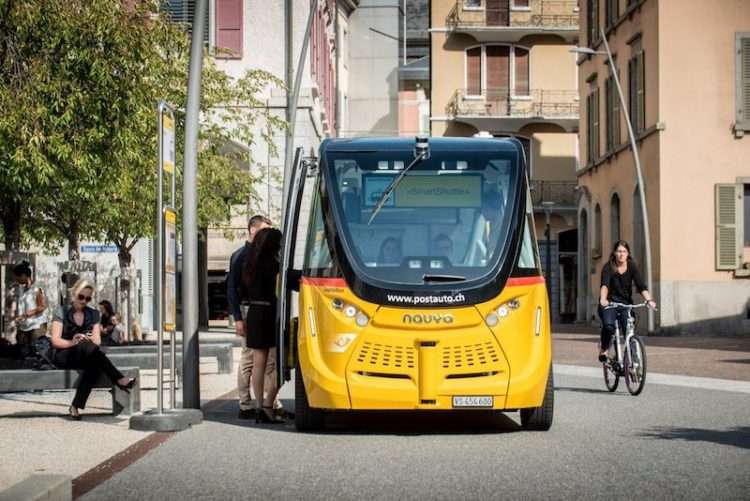 We know that the technology for autonomous vehicles has already arrived, and that’s it’s the regulations that are holding us back – particularly in North America – from making AV a reality on our roads and in our lifestyles. But what about other parts of the world? Today we are looking at Switzerland, the origin of our Founder Sandra Phillips, and specifically giving you three good reasons why the Switzerland Autonomous Vehicle Movement might make it the first city in the world with AVs on the road.

We have just come back from Ottawa and the SCID (Swiss Canadian Innovation Day) which we co-organized with the Swiss Business Hub to honour Canada’s 150 birthday and Swiss innovation. We will share some of the insights from the tour on the Kanata North campus, on another autonomous bus pilot in Switzerland and about the electric needs for the future of transportation soon.

3 Reasons Why Switzerland Could be the Leader in Autonomous Vehicles

Travelling the streets and moving actual citizens around town since the launch of the pilot project in June of 2016, Switzerland’s PostAuto/PostBus 11-seater yellow electric bus (built by the French company Navya) has been a hit. The two SmartShuttles have carried more than 21,500 people amongst Sion, Switzerland’s city in a period of just one year. This experiment has become somewhat of a tourist attraction and is due to continue running until October 31, 2017.

Any accidents? Yes, but just one. The busses were taken off the roads after one of the buses hit a delivery van when the SmartShuttle’s sensor failed to recognize the van’s protruding tailgate, causing minor damage to both vehicles. Despite the accident, however, the service continued after a slight delay and the confidence of passengers remain high.

“Many are a little sceptical before starting their journey but their reaction is, for the most part, very positive once they have arrived at their destination. The assessment is not linked to age: many of the passengers aged 55 and over are enthusiastic and enquire about when and where the SmartShuttles will be used. We also note that the under 20s spontaneously board the vehicle and travel quite naturally as if it were a traditional Postbus,” says PostAuto.

The tech for autonomous vehicles is not lacking in Switzerland, either. A Lausanne-based startup called BestMile was named a finalist for the 2015 Swisscom Startup Challenge, leading the firm to develop the world’s first cloud platform for operating and optimizing AV fleets. Last July, BestMile raised $3.5 million from a seed round of investing in Switzerland and North America, and they most recently raised an additional $2m investment last April comprised of multinationals Airbus Ventures, Partech Ventures and Serena Capital. BestMile will be at the SCID (Swiss Canadian Innovation Day) to share some insights into their platform and optimization. As part organizers of this event, we look forward to sharing more details soon.

3. Switzerland had the first carshare mobility in the world

Often the best way to predict the future is to look at the past, and when looking at shared mobility in Switzerland’s past, the odds are looking good. Switzerland had the world’s very first carshare operation in the world, the Selbstfahrergenossenschaft carshare program, which was launched in a housing cooperative in Zurich in 1948.

Are you convinced that the world’s first fully-functioning autonomous vehicles might be Swiss? We think Switzerland’s Autonomous Vehicle movement is well underway, and can’t wait to see what happens in the next few years. Contact us here.