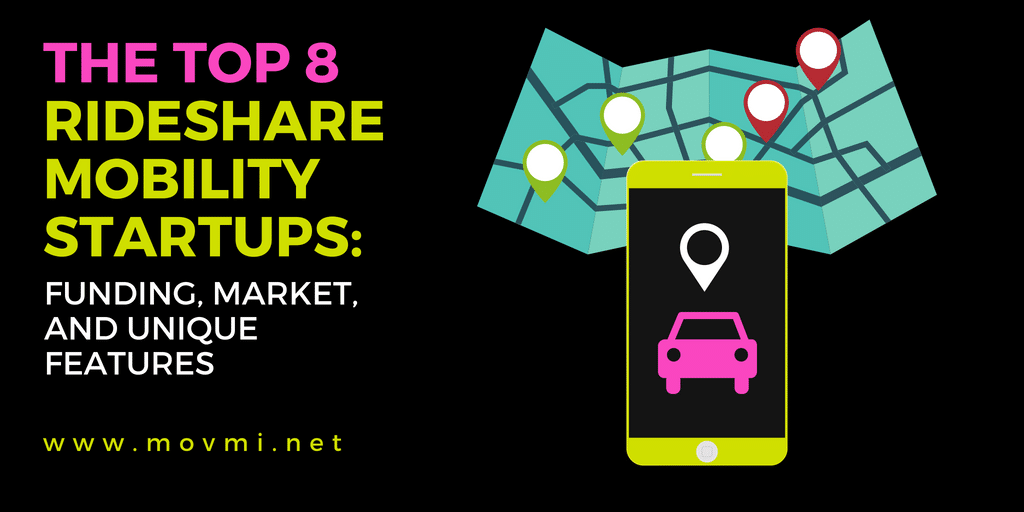 The global landscape of private transportation has changed dramatically over the last decade with the introduction of the ‘shared economy’. Need to catch a ride? No longer will you need to call or hail a taxi. It is as simple as taking out your smartphone, hiring a driver and joining the increasingly popular world of ridesharing.

Ridesharing works on a peer-to-peer, driver-partner model. Drivers (who are mostly car owners) partner up with a particular ridehailing company, like the ones we will review in this article, to provide rides to potential customers. In the US, revenue created from ridesharing is expected to grow, annually by 16.3% which will result in a market volume of US $109,050m by 2022.

Getting from A to B anywhere in the world has never been as easy with the availability of smartphone apps, GPS navigation and online services. This article focuses on the top 8 international rideshare services, their funding, their place in the market and special features they offer to their users and drivers.

Uber is a convenient, safe and inexpensive rideshare service that launched in San Francisco in March 2009. Not only is this an on-demand car service, but you can also watch via your smartphone where your driver is en-route to come pick you up. It now operates in over 672 cities in 77 countries worldwide and is currently valued at roughly $70 billion.

FUNDING: The founders of Uber invested $200,000 in seed money upon conception in 2009. Over the last 8 years, Uber has raised over $22 billion from 18 rounds of venture capital and private equity investors.

MARKET: Uber is one of the most valuable startups in the world. According to PitchBook, it ranks second in the 2018 CNBC Disruptor 50 list, with a valuation of $69.6 billion. Uber’s reputation has suffered quite a lot this year, with legal cases stemming from sexual harassment accusations, a cybersecurity breach and regulatory problems, but it has still managed to hang on to the rideshare top spot.

FEATURES: Uber offers some extra features that aren’t very well known, such as letting others follow your ride in real time through the app and the ability to split the fare seamlessly when sharing a ride with friends. Uber also has the ability to let you schedule your rides ahead of time and add multiple drop off points on your journey. The app, allowing users to summon a vehicle ranging from a limousine to a regular car, is available in 128 cities in 37 countries around the world.

DiDi, formerly Didi Kuaidi, is a major Chinese ridesharing, AI and autonomous technology conglomerate founded by Cheng Wei. It provides rideshare services for more than 450 million users across over 400 cities in China.

FUNDING: According to PitchBook, through funding and private investors, Didi Chuxing raised $9.5 billion dollars last year alone and has a current valuation of $56 billion. It has also invested in some of Uber’s competitors in other markets, including Brazil’s 99, India’s Ola, Singapore’s Grab and U.S.-based Lyft.

MARKET: Didi Chuxing made its debut on the 2018 Disruptor 50 list by taking the number four spot, after number two (Uber) and before number five (Lyft). The company has established its dominant position within the Chinese market, claiming to have 450 million users and 21 million drivers which equals more than 30 million rides a day which is double that of Uber, Lyft and all other rideshare companies combined.

FEATURES: Didi has recently added a series of safety features to its service. An SOS button has been added so that with one click trained Didi SOS task force members can be on hand, in real time, to asses the situation. Didi also works with relevant state departments to conduct in-depth background checks on their drivers and to protect user information with a number masking features as well.

Grab is a Singapore-based technology company that offers ridehailing, ridesharing, and logistics services through its app in Southeast Asian nations.

FUNDING: Grab acquired Uber’s Southeast Asia business earlier this year. In its next round of funding, Toyota has committed to $1 billion in capital, which will value Grab at over $10 million. The Singapore-based firm also raised a $2 billion led by SoftBank and China’s Didi Chuxing last July with plans to extend by a further $500 million.

FEATURES: Some of Grab’s features benefit their drivers, which include real-time feedback on drivers’ trip experience: My Destination, which is a new feature that lets driver-partners set up to two preferred destinations per day and match with riders whose journeys are on the way to their those destination. A Kerbside Hotline is also available to receive instant support and guidance from a Grab employee.

Lyft was launched in June 2012 in San Francisco. It operates in around 300 US cities and provides 1 million rides per day.

FUNDING: Over the last 14 months, Lyft’s value as a company has more than doubled. The ridehailing company has raised $2.9 billion in primary capital since April 2017 and It raised an additional $600 million in its latest round of fundraising.

MARKET: Last year, Lyft saw a huge surge in the market and boosted its share of U.S. ridehailing business by 61 percent. The last 6 months have seen it expand into Canada, which puts even more pressure on it’s competitor Uber, which has suffered in the last year.

FEATURES: Auto-Switch is a feature that helps to ensure you are getting the passenger pickups closest to where you are located. Lyft also gives you the ability to declare your current ride as your last ride and with it’s latest app developments there is a ridesharing category called Lyft Shared Rides (a rebrand of LyftLine), better integration with public transport, and a “one tap to ride” feature.

Olacabs is a web and mobile-based application that allows users to search and book for cabs. It was founded in 2010 and based in Bengaluru, IN.

MARKET: Ola Cabs built its business model on Uber’s US success, but it now ahead of Uber in the Indian market, with a 80% share in the market.

FEATURES: Ola offers on-demand auto rickshaw service, carsharing and bicycle sharing services. In addition, it provides Ola Select, a subscription plan which provides extra facilities to the customers who choose to use this service. You can also book cabs through their call centre and pay in cash, which considers people who do not have access to smartphones within the country.

In Indonesia, a motorbike is called an Ojek and as cars and taxis are not affordable to many residents, GoJek offers a point A to point B service, just like its competitors. In was founded in 2010 with just 20 motorbikes but now has a fleet 1 million drivers and offers 18 app-based on-demand services.

FUNDING: In February GoJek raised $1.5 billion in a fundraising round, from a dozens of international investors such as BlackRock and Google. The round valued Go-Jek at around $5 billion.

MARKET: GoJek is the only company in South-East Asia that made it into Fortune’s 2017 list of “50 Companies That Changed the World,” ranking at number 17. The company plans to expand abroad, which will increase rivalry with it’s competitor Grab. They recently announced an investment of $500 million to move into four new markets in Vietnam, Thailand, Singapore and the Philippines.

FEATURES: GoJek is unique as it offers a variety of services to the user through the app-based platform, such as home deliveries, including groceries and medicine. It can also be used as a courier service, used to shop and to purchase tickets for upcoming events. Its main service is its rideshare service that features cars as well as motorbikes.

Gett is a UK based rideshare app that allows its user to hail taxis instead of drivers and is available in more UK cities than its competitor Uber. It was founded by Dave Waiser.

FUNDING: Gett has raised $80 million led by existing investor VW with participation from other previous investors. Post funding, the company is now valued at $1.4 billion.

MARKET: In the 120 cities globally, where Gett is now active, New York, London and Moscow are its biggest markets according to CEO and Founder Dave Waiser. After acquiring its competitor Juno in New York, it now has more than 45,000 drivers on its books, or more than half of the 80,000 licensed cab drivers in the city.

FEATURES: Gett pays particular attention to its core service. The company claims to put its drivers needs first by offering great hourly rate and 24/7 support. There is also an in-app tipping feature. Gett does offer shuttle services and courier deliveries on a smaller scale, but their main focus is serving consumers with rides, with a heavy emphasis on business users.

Cabify is a Madrid-based rideshare company, founded in May 2011 by Juan de Antonio.

MARKET: Cabify is currently active in Spain, Mexico, Chile, Colombia and Peru, with 13 million users but plans to expand into major Latin American cities including São Paulo, Rio de Janeiro and Buenos Aires, as well as some new cities in Europe. In 2017, the company has said it grew 500 percent in gross revenues and travel requests, increasing trip requests by six times compared to 2016.

FEATURES: Cabify offers their users trip preferences, such as which vehicle they want to ride in, if it is air conditioned and the choice of music played. The app is attractive and user friendly and allows you to reserve or schedule rides. It also saves previous places and usual destinations and makes suggestions for the next trip.

Are you interested in learning more about rideshare startups, or perhaps starting one yourself? Get in touch with us here for more information on the industry.

Note: This article has not been endorsed or sponsored by any provider and there is no affiliation between movmi and any of the mentioned parties.