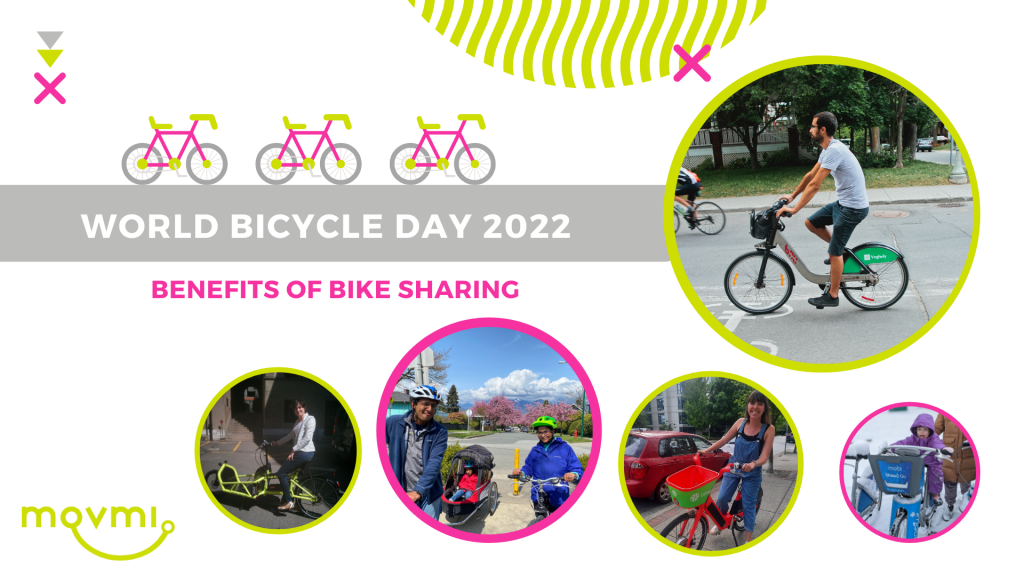 Today, June 3rd, is World Bicycle Day and it was created to raise awareness to the benefits of cycling — a simple, affordable, clean, fitness-enhancing, and sustainable means of transportation. Cycling and bike share schemes contribute to cleaner air and less congestion. It is a sustainable transport system that promotes economic growth, reduces inequalities while bolstering the fight against climate change.

The Origins of the Bicycle and Bike Sharing

A German baron named Karl von Drais made the first major development in the creation of the bicycle when he created a steerable, two-wheeled vehicle in 1817. Known by many names, including the “velocipede,” “hobby-horse,” “draisine” and “running machine,” this early invention has made Drais widely acknowledged as the father of the bicycle. But the bicycle as we know it today evolved in the 19th century thanks to the work of several different inventors.

Fast forward 138 years to Amsterdam in 1965 and we see, what is now considered the first bike share system in history! Known as Witte Fietsen (“White Bikes” in English), the program collected bicycles, painted them white, and simply placed them on the streets for public use. It was the work of a private group of anarchists called Provo.

Witte Fietsen may have attracted much attention, but it was short-lived. The free bikes were quickly removed by the police, who were hostile to Provo’s anarchist initiatives. But for bike sharing schemes, it was just the beginning.

In the mid 90s, Denmark launched the world’s first large-scale bike share programme. It worked on a deposit. You dropped a coin in the bike and when you returned it, you got your money back. A lot of bikes got stolen though, because the users could remain anonymous.

Over the last two decades we have seen a bike sharing boom, mainly due to a dramatic increase in technological innovation, the ever growing popularity of the circle economy and new green policies being introduced by cities around the world, in accordance the UN sustainable development goals.

More recently and especially in the wake of the pandemic, we have seen a new trend in bike sharing, electric bicycles. In our recent whitepaper, ‘Electric Bikesharing’ we take a close look at the challenges with e-bikesharing, but also its opportunities, by providing real life examples, insights and data describing how to attract riders, ensure operational feasibility, and improve multimodality of cities.

The Benefits of Bike Sharing

By using bike share systems, users are also accessing a method of active transportation that comes with many health benefits. Whether intentionally or not, those who commute to and from work everyday by bike are also gaining exercise and in the aftermath of the pandemic, health consciousness is something that is on everyones mind.

E-bikes are hassle-free, affordable transportation that adds an extra layer of accessibility that mechanical bikes can’t. On average, riders travel 1.7 times the distance on a shared e-bike compared to a regular mechanical one.

During the pandemic, we saw a decline in public transportation ridership levels. People around the world pivoted to more personal methods of transportation, of which cycling and active transportation, became one of the most popular options. Cities implemented and expedited policies to build more cycling infrastructure. Creating public-private bike share partnerships in the wake of the pandemic is a much easier road to navigate as it is within the cities best interests to build these transportation systems. Operators are more likely to obtain subsidies from cities to help launch and operate their bike sharing schemes, which are also a highly scalable business model for mobility operators.

Furthermore, companies may come to your aid as a bike share provider as it offers them an affordable option for corporate mobility, rather than using private cars and vehicles. Bike-sharing can facilitate business-related tasks and even give their employees an affordable and healthier way to commute to and from work. This is also true for educational institutions, such as universities, who are always searching for low cost ways to transport their students around campus.

The data that is collected by bike share schemes also has a high commercial value to businesses in retail, restaurants and even car sales, as well as to local governments seeking more detailed information for urban planning and management applications. Meaning this can be used as a revenue stream. Another way for bike share operators to generate profit is by using both the physical body of the as well as the app as an advertisement platform.

One of the biggest motivators for implementing BSS for cities is improving overall air quality. The use of single-occupancy vehicles is one of the largest contributors of GHG emissions within cities. With the pressure of the climate emergency, municipalities across the world are pushing for policies and programs that decrease reliance on car ownership – bike share schemes are one of these programs.

By creating more bike share schemes, cities are reducing the need for the personal car, which means a reduction in traffic congestion. They also provide better opportunities for local businesses by increasing overall and impulse shopper footfall. BSS can also improve land use by optimising spacial economic through better public and private land user, for example, removing the need for so many parking lots. This can also create more liveable, green spaces within cities.

E-bikeshare schemes can be used as a measure to solve the first/last-mile challenge for areas that are underserved by public transportation. As cities shift their stance away from favouring automobiles, TDM strategies are increasingly being integrated with development and transportation policies. Between 50-84% of car trips are replaced by those made by e-bikes. All pointing towards how e-bikesharing can propel cities towards achieving their targets when it comes to climate action, social accessibility, and of course multimodal and car-lite transportation.