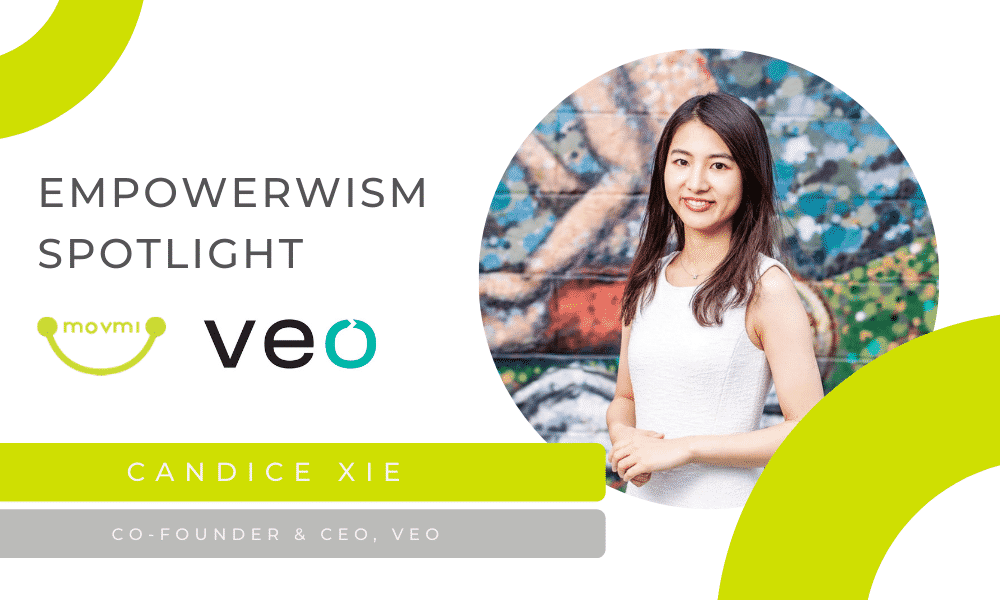 If you already watched this year’s Empower Women in Shared Mobility 2021 award ceremony then you will know that during the event we had the pleasure of hosting a fireside with Candice Xie, Co-Founder and CEO of Veo and Jessica Robinson, Co-Founder and Partner of Assembly Ventures.

Candice and Veo began as applicants to the EmpowerWISM program but during judges deliberations it became clear that they were the one applicant that really stood out above the rest, in terms of overall business success – especially in their short lifetime. Veo’s mission is to establish micromobility as a true transportation system to reduce automotive use and promote widespread utilization of shared alternative mobility in a safe and reliable way, while and delivering successful innovative and sustainable programs. CEO and Co-Founder Candice has a background as a financial analyst and has utilized this in helping to create and operate Veo.

We decided that Candice and her company Veo deserved special recognition for their incredible work in micromobility. Keep reading to learn more about Candice Xie and Veo. Watch the EmpowerWISM award ceremony here.

WHO IS CANDICE XIE?

Candice Xie is the Co-Founder and CEO of Veo, in fact, she’s the only woman CEO of a major e-scooter company today. Previous to her job at Veo, she work at Schneider Electric, the Bank of China and MassMutual Financial Group. Candice uses her experience and background in financial analytics to advance Veo through a dynamic regulatory environment toward efficient and effective expansion.

Veo, formerly known as VeoRide, is a micromobility company that primarily serves college campuses and smaller cities without robust public transportation networks. In an interview with Crain’s Chicago Business, Xie said she was inspired to start the company after having to choose between walking or waiting 45 minutes for a campus shuttle as a student.

“There was really no affordable way for me to get around campus quickly… and that’s true for a lot of campuses and smaller, rural cities around the country.” – Candice Xie, Co-Founder and CEO

The two Founders hail from China, where mopeds and shared bikes crowd the streets, and they saw an opportunity for such a bike-share model in the U.S. It took a year for Candice to land her first client with Veo. Xie and Tan landed their first contract with the University of Kansas in 2018. Now they operate in more than 50 cities across the country, and Veo’s customers have taken over 3 million rides.

Veo is an easy-to-use and adaptable, dockless shared micromobility company. They offer all modes of short-distance transportation, including bikes, e-assisted bikes and e-scooters. The U.S. scooter industry was worth an estimated $18.6 billion in 2019, and Chicago-based Veo faces stiff competition from companies like Bird and Lime. However, in Veo’s four years of operation, they have proven themselves to be worthy competition within the market.

“We try to keep up with other companies by out-innovating them.” – Candice Xie

By following their mission for a green and sustainable future, providing a reliable service for their customers, time after time, and constantly innovating within the space, they have steadily grown to a point where they have become the first profitable micromobility company. In fact, Veo CEO Candice Xie says her company reached profitability in May, months ahead of Lime.

In a witty response to Lime’s November announcement of profitability, Candice said,

“I must have forgotten to take a global victory lap for achieving the most basic fundamental of business: bringing in more money than we spend.”

Veo currently operates more than 30 dock-less micro-mobility share programs nationwide in Arkansas, Illinois, Indiana, Iowa, Kansas, Massachusetts, New Hampshire and Texas, and continues to expand in additional markets each month. Constantly innovating and pivoting, their newest scooter—the Veo Cosmo—is a seated moped made for all body types, not just fit 20-somethings who can stand for long periods. The Cosmo is also built for icy weather and unkempt roads, perfect for Chicago’s winter and construction seasons.

Furthermore, in the wake of the pandemic, the company released a program called VeoFlex, allowing customers to purchase or rent bikes directly from the company weekly or monthly as a way to avoid spreading germs.

There has been a lot of “hype” over micromobility within the last few years. This also means that there is a lot of money up for grabs within the market and large amounts of funding being raised. Despite this, Veo decided to build their business sensibly, and not by following in the footsteps of other micromobility providers. Instead they promise their investors goals they can actually meet and deliver on. Their motto is “profitability, scalability and responsibility” and because they are based in the Midwest, they are able to filter out a lot of the usual noise and stay true to who they are as a company. In an interview with Smart Cities Dive, she said,

“I’m the only woman founder in this micromobility industry. So that actually impacts the way we’re operating business and differentiates us from our Silicon Valley bro who is promising the harvest for their investors, which is their sole purpose of running a business. Personally, I disagree with it because I find that approach very contradictory to the goals we are trying to achieve from the micromobility service side.”

From day one they wanted to build something great but also sustainable, without having to rely on too much on external funding. She takes VC funding very seriously and as a long term commitment. It’s important to choose a partner correctly because it’s very hard relationship to break up – it’s like marriage.

Starting small, they began by trying out one market at a time, now they have scaled and are operating in 20 markets today. Not only that but 90% of their markets are now profitable, which is an incredible achievement in the start-up and micromobility world. Mapping out their journey in a thoughtful and strategic way, was the best path for them to scale and grow. New mobility also needs to work with the city. Veo has made it their priority to find out the correct steps they must make in order to create infrastructure and save space within the cities they are operating. This takes patience and expertise but according to Candice, it is also very rewarding in the long term,

“I understand how uncomfortable the cities are when they’re nerve-wracked by Lime and Bird because they’ve dropped hundreds of thousands of scooters in their cities without asking for permission.

It’s very easy for me to have the empathy to understand what they’re going through and build the relationship. I can play as the adult in the room in the industry.” – Candice Xie

Candice is a low key person, so her strategy was to focus on the business first and foremost, then when they were expanding, they focused on increasing their brand awareness. When they became known for their good reputation, she decided to take more responsibility as a figure head, to come forward and speak out about being in this industry, and in particular, being a woman in this industry.

Moving forward into 2021, the company is hoping to focus on how to engage with employees more internally and understand their customer more externally. It’s hard to innovate and create in confined work environment (due to Covid-19 restriction) so this is a big focus for the company next year.

put a women in charge

According to the Huffington Post, last year, only 23 Fortune 500 Companies were led by women. But women are just as qualified as men are to lead, so why is there such a huge disparity between them?

A 2015 study by talent management system Saba Software, conducted by the Harris Poll, found that women are more likely to approach their careers in a self-reflective way and value factors such as meaning, purpose, connection with co-workers and work-life integration. Candice Xie is the perfect example of this type of leader, she said,

“Being a woman actually provides different perspectives to the business, especially into our earnings and market development strategy because I’m a person who loves to calculate the relationship and build on trust.”

This inclination toward a holistic, self-reflective approach could explain why female employees define leadership differently than some men do. Sixty-five percent of women (versus 56 percent of men) said they view leaders as those who share their knowledge and connect with their colleagues to help the team and the business, which suggests to us that women make more-effective leaders that their male counterparts.

Here at movmi, we firmly believe that women are equally (if not more) capable than men at taking charge and leading in business, although more reluctant to step into the limelight and seek recognition for their achievements.

“…right now — not only in micromobility but in tech in general — a lot of women, it’s not our nature to constantly seek for recognition or advocation. So that’s the reason why I reflect on myself … I want to set a good example as a female founder. Share your great work with the world and let them know you’re powerful, you’re intelligent, and you’re able to lead a strong company like I do.” – Candice Xie

For an example of how women excel at leading, we only have to look at how female-led countries handled the Coronavirus pandemic ‘systematically and significantly better’ than those run by men.

If the pandemic, Candice Xie and all the amazing applicants from our Empower Women in Shared Mobility 2021 program has shown us anything, it’s that women make compassionate, innovative and effective leaders and should be more equally represented in leadership roles across all industries in business, politics and beyond.

If you liked the EmpowerWISM Award program make sure you check out the Carshare City Awards 2020 here. Watch our Women in Shared Mobility series here.