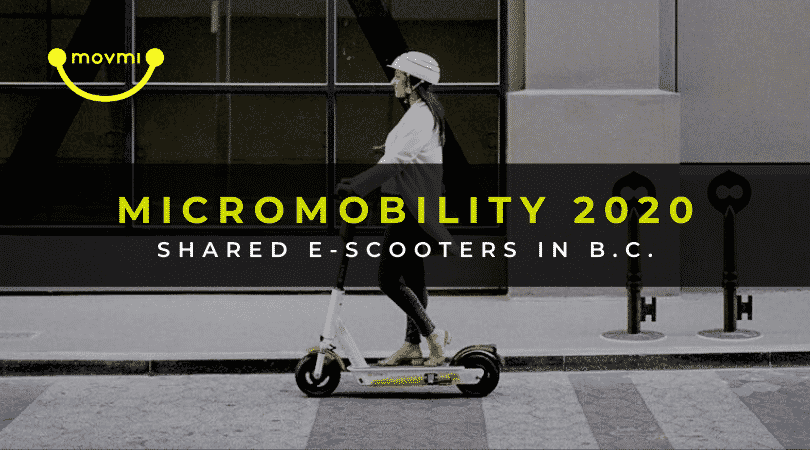 The rise and rise of micromobility has been well documented over the last few years with companies like Mobike, Citi Bike and Jump Bikes leading the way, internationally, with their bicycle and e-bike sharing schemes. In 2018 the trend was revitalized with the introduction of the shared and dockless electric scooter (e-scooters for short), established by Lime and Bird across the United States.

These e-scooters quickly found such strong product-market fit that Bird and Lime became the fastest ever US companies to reach billion dollar valuations. Since then, the e-scooter trend has only growth, with small start-ups popping up in cities around the globe, enforcing the popularity of this method of transport.

However, there have been numerous negative headlines about e-scooters being vandalized, congesting sidewalks, being stolen, causing injuries, and experiencing intense competition. These headlines have twisted the opinions of many, particularly local and provincial municipalities, British Columbia included. Despite all the positive funding news and frequent use by consumers, logistical and safety questions must be answered by all scooter companies hoping to make Vancouver and the surrounding areas their new home.

That being said, the B.C. government is currently accepting proposals from communities to be part of a pilot program to test micro-mobility devices such as e-scooters and electric skateboards. Last October, the province introduced new legislation that allows communities to figure out how best to include the use of zero-emission electric stand-up scooters, electric single-wheeled cycles, Segways and hover boards to operate on the road or sidewalks.

Read on if you want to learn about:

To read more articles about the rise of micromobility and its place in future transportation networks worldwide, click here. 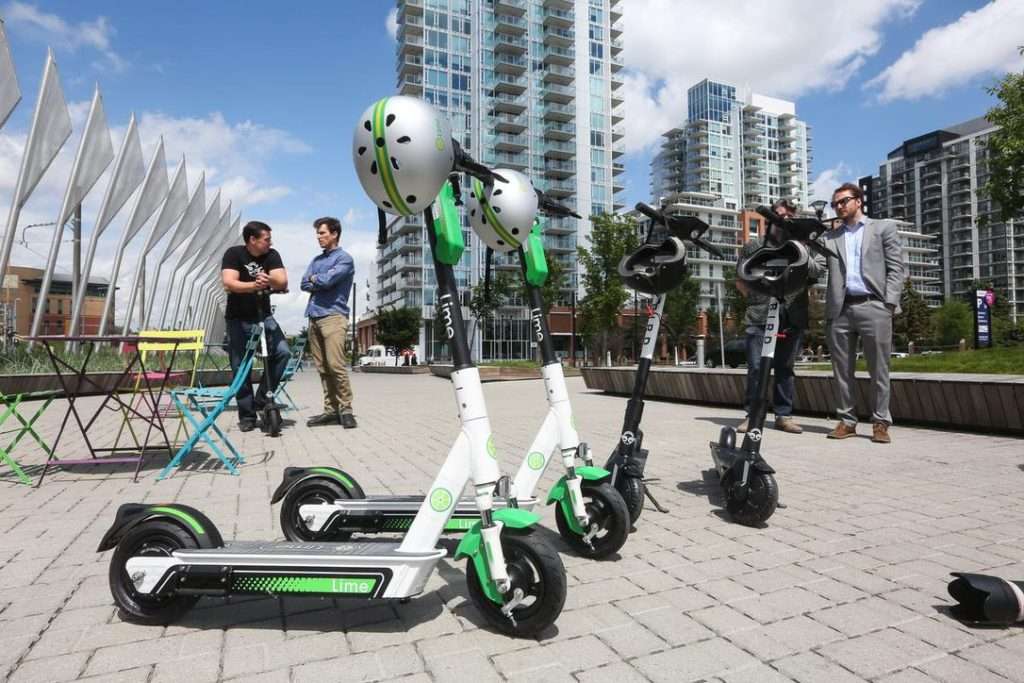 ARE E-SCOOTERS HERE TO STAY?

Fans of the micromobility revolution praise the service for its ability to provide convenient and quick rides, but most importantly because it’s a fun solution to the first and last mile problem. Others have questioned the safety and sustainability of micromobility. There have been many debates on it’s long term survival as a transportation solution, however early surveys suggest micromobility is replacing walking trips and generating new trips taken as well.

In the U.S e-scooter sharing is used for very short trips with 63 percent of these trips being less than 1 mile long. Dockless e-bike sharing is used for longer trips with only 35 percent of trips being less than 1 mile long. E-scooter riders are more likely to ride in the middle of the day and on weekends, suggesting they are mainly used for enjoyment and recreational use. Dockless e-bike sharing exhibits morning and evening peaks, suggesting this method is used more for practical reasons such as commuting to work.

Further studies are needed, but it would appear that micro-vehicles are just be at the beginning of their journey. It is anticipated that the demand for micromobility will only increase as cities become more populated and vehicle design and innovation improves. Without a doubt, the growth of micromobility will continue to pose issues and challenges that regulators will have to address, but could potentially alternate travel behaviour and city planning in the future.

The first municipal government to launch a kick e-scooter pilot project under the constraints of the previous MVA, last Summer was the City of Kelowna. Due to legislative constraints, the e-scooter share operators were available off-street on the Okanagan Rail Trail — a 12-km-long designated citywide pathway that begins at Kelowna International Airport and reaches the University of British Columbia’s Okanagan campus, downtown Kelowna, and the Okanagan Lake waterfront.

During the peak summer season, in an interview Matt Worona, the active transportation coordinator with the City of Kelowna, said that there were over 5,000 riders in under a month of operation with a maximum daily fleet size on any given day of 45 e-scooters.

Now that personal vehicle regulations have changed in B.C and case studies providing valuable data, like Calgary (see below), have emerged, the B.C. government is calling on municipalities to submit proposals on how they would allow e-scooters and electric skateboards in their communities.

The province has set out an aggressive timeline with pilot proposals from interested communities and organizations to be submitted by March 6 and a possible launch of the services in summer 2020. We anticipate that cities like Kelowna, Victoria (who ran a dockless bikeshare pilot with U-bycicle) and the North Shore (a collaboration between West Vancouver, the City and the District of North Vancouver) were some of the few municipalities that submitted their expression of interest in time.

The long-anticipated legislation comes after the province launched its active transportation strategy last year for cleaner, more active transportation, which is part of of the Province’s CleanBC plan to build a better future for all British Columbians. ‘Move. Commute. Connect.’ The provincial government is committed to protecting the environment and working in partnership with communities to improve province-wide walking, cycling and other active networks. They hope to create community-specific active transportation networks that are safe, accessible and convenient for everyone. Which possibly means that e-bike services will be favoured over e-(kick-)scooters.

In October 2018, Lime deployed 500 e-bikes throughout the streets of Calgary as part of a micromobility pilot scheme. Between October 2018 and October there were 165,000 recorded e-bike trips taken, clearly showing the services popularity in the area. Encouraged by this success, Lime then introduced 1,000 kick e-scooters in July 2019 alongside Bird, who deployed 500. Between July 2019 and October 2019 there were 750,000 recorded e-scooter trips.

Despite the e-bikes obvious success, user demand and popularity in the region, Lime will only re-enter Calgary with the kick e-scooter, as the e-bikes were not as profitable.

From this e-scooter ridership information and data collected from this pilot scheme, the city can answer questions relating to how many people are using the vehicles and when and where they were moving throughout the city.

Alongside the information they collected from the e-scooter operators, the city worked alongside Health Alberta to assess any scooter related accidents or injuries and surveyed local residents to gauge public reaction. Upon review of all this data, the city put forward recommendations to address any concerns for the next phase which will begin in Spring 2020. These included:

The city received operator data (origin-destination) from both operators during pilot. They also worked with Health Alberta to assess accidents injuries. They also ran a public engagement series surveying residents that use e-scooters and those that are not. Based on this data the City has put forward these recommendations.

We had a chance to talk to the City of Calgary’s staff responsible for the pilot program and found a few interesting titbits of information.

The city of Vancouver also has its own long-term strategic vision: Transportation 2040, which will help guide transportation and land use decisions and public investments for the years ahead. Many of the goals, targets, and policies in this plan-of-action are shared by the Greenest City 2020 Action Plan, which is a wide-ranging strategy to make Vancouver the greenest city in the world based on 10 goal areas, of which green transportation is one.

As part of this 2040 strategy and the B.C. Active Transportation strategy, TransLink, in close collaboration with the Metro Vancouver municipalities, has created guidelines for the procurement and licensing of micromobility services across the different municipalities in the region.

The Guidelines will focus on 6 key issues that include:

Data sharing is essential to help inform and shape the development of micromobility and achieve regional goals in Metro Vancouver. In the short term, data sharing agreements would assist municipalities to gain a better understanding of current-day usage patterns and identification of immediate issues. Low-cost, high impact operational changes that help to optimise the existing network. In the long term, the municipalities and the region will have the ability to make more informed decisions about transportation network development, including policy changes and regulatory frameworks.

Payment and pricing structures that are financially sustainable and have the potential to adapt to integrated payment options in a secure manner. Structures that are planned for fare integration with transit and interoperability with other devices and services.

Right-Of-Way (ROW) Management to identify and manage risks when devices are being used and stored within ROW. Clear identification of issues that can be expected to be managed, as well as those issues that are best dealt with outside of the permitting process.

Each area has several proposed recommendations based on best practices and the interests expressed through consultations by Metro Vancouver municipalities. Greater understanding of the short-term options available to municipalities and other key stakeholders to influence shared micromobility behaviour through guidelines and a permit system.

These guidelines in combination with the new legislation will allow the provincial government to work with communities to research and test how new mobility technologies should be used to promote the safety of all road users and address changing public mobility needs. Whether or not shared kick e-scooters will thrive and survive in Metro Vancouver and the Lower Mainland remains to be seen. We are very optimist of its success, providing all operators adhere to the parameters set out by the local municipalities. Any operator that wants to launch in British Columbia needs to have a firm approach to planning: this applies to home area, parking hubs to avoid clutter from day 1, the logistical work every day to rebalance the scooters properly and what the right education program for riders is. movmi’s playbook for micromobility operators solves all those questions. We are very much looking forward to a new method of transportation in the city, particularly one that guarantees a fun, enjoyable ride!