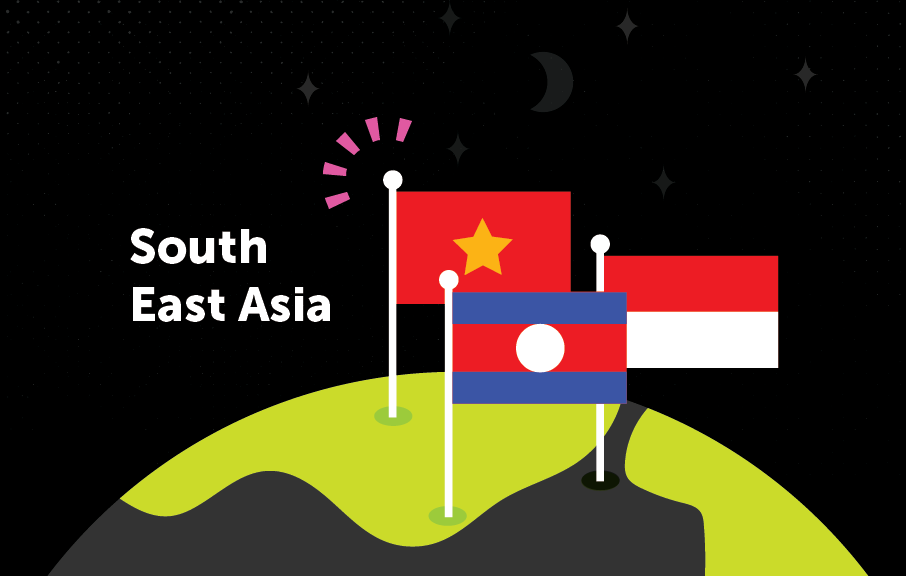 Today we are taking a deeper look at the South East Asia shared mobility industry, from car sharing to bike sharing and everything in between.  If you missed our last shared mobility by region post on Russia, you can find that here.

South East Asian countries like Singapore, Malaysia, Indonesia, Philippines, Vietnam, Thailand, Myanmar, and Cambodia have what might be a surprisingly rich and diverse landscape for shared mobility opportunities like carsharing, ridehailing, and bikesharing, with the ultimate aim to reduce congestion in these areas and increase the quality of life for its citizens. Particularly in the capital cities of Southeast Asian countries, congestion and pollution can be a strong cause for concern. 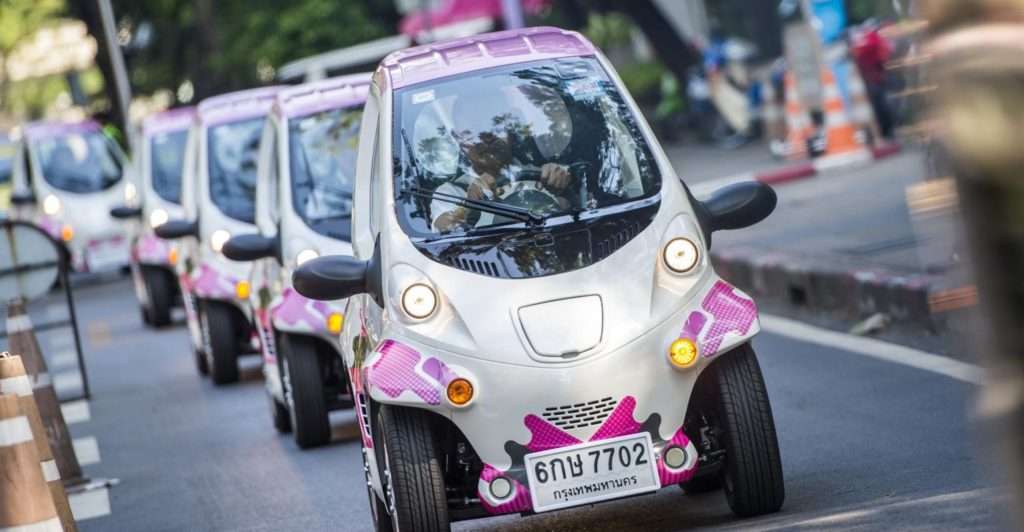 Inspired by US station-based carsharing platform Zipcar, Hipcar is the first self-service car rental program in Indonesia. This on-demand, self-driven carsharing service is controlled by the mobile app for registering, topping up, and unlocking the car. Unlike most carsharing companies who partner with conventional car rental services, HipCar actually owns all the cars in its platform. Hipcar has a partnership program, allowing car owners to turn their unused vehicles into passive income.

In January of 2018, Toyota Thailand launches a two year long carsharing project with 10 ultra-compact electric cars in Bangkok, with the purpose of studying motorist behaviour in the area to determine long-term viability. The EVs have a top speed of 60 km per hour and a range of 50 km, requiring six hours to fully charge. The service area covers Bangkok’s Chulalongkorn University campus and commercial region with 12 parking stations that connect to public transportation, 10 charging stations, and 33 parking lots. Users register on a mobile app for a TB100 ($3.05) fee and the per trip fee is TB30 ($0.92) for 20 minutes, and then TB2 ($0.06) per additional minute thereafter.

Also in Bangkok, Haupcar is available at 100+ stations around the city. This program charges per hour and distance driven, and offers a wide range of vehicles for both shorter and longer trips.

In addition, the Malaysian station-based carsharing startup GoCar Mobility was founded in 2015, with more than 822% year-on-year revenue growth; in 2016, Mayflower Car Rental, part of the Tan Chong Motor group, acquired 55% of GoCar. GoCar allows for daily or hourly car rentals, and since 2017, they’ve offered various vehicle models such as sedans, crossover SUVs, MPVs, and pickup trucks. GoCar is currently available at over 230 locations across 5 states in Malaysia: Selangor, Wilayah Persekutuan, Kedah, Johor, Penang.

In an attempt to battle gridlock issues, electric, free-floating carsharing service BlueSG, launched in partnership with the government in Singapore in 2017. This subsidiary of France’s Bollore Group launched with 80 cars and 32 charging stations, and received 20,000 rentals in less than 3 months after launch. As of this month (October, 2018), BlueSG just announced the opening of its 100th charging station in Singapore. They aim to have 1,000 electric vehicles and 2,000 charging stations by 2020.

Peer-to-peer carsharing models are prevalent in many Southeast Asian countries, allowing car owners to make passive income by renting their vehicles when they are not using it themselves. This is an important option for citizens, particularly the younger generations, as 25% of millennial bankruptcy are due to unpaid car loans. In Malaysia, Roadaz (since 2016) and Moovby (which was the first in the country) are the leading peer-to-peer carsharing companies with a strong foundation being backed by vehicle insurance giant Allianz.

In Singapore, iCarsClub is one of the most well funded carsharing companies having raised $60 million in series B funding from IDG Capital Partners and MorningSide Ventures in 2014. The majority of that capital, however, went towards the expansion of their spinoff business, PPZuche in China. Today, iCarsClub has just a few hundred vehicles registered in Singapore compared to the more than 100,000 claimed by PPZuche in China.

Also in Singapore, Honda’s KahShare has gone through many different changes, and operates as a carsharing/rental hybrid. Rentals are available from a minimum of one day, to one month, or one year.

In Thailand, Drivemate is a P2P startup with a large network that offers 9,000+ cars and tuk-tuks. The company announced their “mid-to-high six digit” seed round funding in 2017. Unlike other peer-to-peer schemes, Drivemate offers car delivery to the renter, meaning the car owners drive the vehicle to the location of the renter. Drivemate is available in 35 cities across Thailand and users have booked over 1,000 cars. Renters can opt for just a car or a car and a driver. 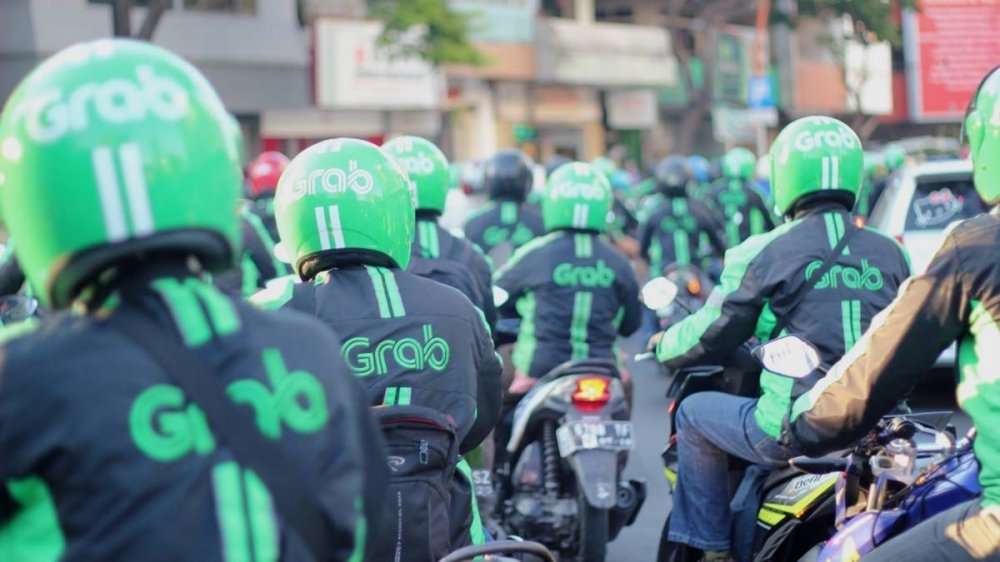 Ridehailing is a popular and growing method of shared mobility in South East Asia; in fact, 89% of respondents said that ridehailing services are comfortable and convenient, according to a recent survey by Thailand’s Assumption University. In Indonesia, roughly 84,000 cars are registered with ridehailing services, surpassing the number of taxis at 62,000. In 2017, Indonesia’s largest taxi operator, Blue Bird Group, reported revenue decreases of 10%.

Grab is South East Asia’s leading ridehailing platform with 2.4 million drivers throughout South East Asia. More than just a ridehailing company, Grab is considered a tech company that also offers ridesharing and logistics services in Singapore, Malaysia, Indonesia, Philippines, Vietnam, Thailand, Myanmar, and Cambodia. Grab was launched by a group of friends who were personally challenged by the difficulty of getting a taxi in Southeast Asia. GradFood is the food delivery service under the Grab platform which works similarly to Uber Eats. Additionally, Grab launched GrabPay in 2016, a mobile payment service to enable payments to restaurants and other merchants. In 2017, Grab was infused with $2 billion in funding from Toyota, and later that year Grab reach one billion rides, occupying 97% market share in the third-party taxi hailing market and 72% in the private vehicle hailing market.

In March of 2018, Uber announced its exit from South East Asia, selling it’s market share to its competitor, Grab, with a 27.5% stake in the company and Uber’s CEO moving over to Grab. This also included its food delivery service of Uber Eats. This was said to be the result of Uber losing $4.5 billion in 2017 and the large competition in Asia, as well as regulatory limitations in areas of Europe. Just earlier this month (October, 2018) Microsoft announced it will be investing an undisclosed amount into Grab.

Go-Jek is another leading ridehailing platform with a stronghold (1 million drivers) in its Southeast Asian home country of Indonesia, where they also offer food delivery. Go-Jek also has a Go-Pay e-money service, which broadens its reach to restaurants in Indonesia. Almost 80% of Indonesians surveyed by Universitas Indonesia said they would be unsure what to do without Go-Jek. As Grab’s largest rival, Grab recently announced its plans to move into other neighbouring countries like Singapore, Philippines, Thailand, and Vietnam.

According to Frost & Sullivan, there were 6.1 billion ridehailing trips in six major Southeast Asian countries throughout 2016, and they have estimated the market size at $20.4 billion which they expect to grow 6.5% year-over-year through 2021. 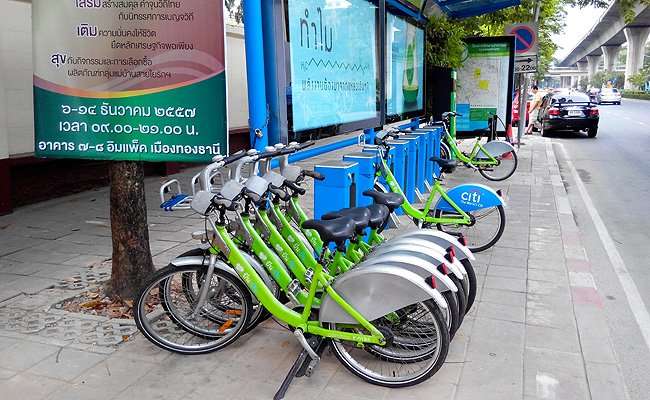 Pun Pun Bike Share Program launched in Bangkok, Thailand in October of 2012, first introducing two stations with eight bicycles each. In 2017, the program announced that it would be adding thousands of bikes and more than 100 new stands, taking over the abandoned “Genius Taxi” taxi-call stations. Genius Taxi was a 30 million baht program which launched in 2005, but died out by 2014. The program consisted of 462 taxis and 150 stations around the city of Bangkok where a taxi could be called with a call-button service. The system, however, never took of with consumers and was hardly used.

It was announced in January of 2018 that a Mobike bikeshare scheme would be added to Ho Chi Minh City, Vietnam, as a part of there 2020 smart city plan.

If one region desperately needs fewer cars on the road and more mobility options, it must be South East Asia. A region notorious for gridlock, hours spent in traffic on a daily basis, and a superior need for quicker, easier commuting solutions for its citizen have never been more critical. In fact, the World Bank’s 2015 report stated that Kuala Lumpur is wasting 1.2 billion litres of fuel in traffic congestion, roughly 2% of GDP, and the city’s public transportation use rests at just 20%.

Jakarta, also known as having the world’s worst traffic, has plans to introduce MRT in 2019 which is expected to cut the 20km travel time from LeBak Bulus to Buneran Hotel Indonesia in half.  The city aims to increase its public transportation use from the current 23% to 60% by 2030.

Do you have a region you’d like to see covered in our Shared Mobility by Region series? We will be sharing one article every month covering a new region, and would love to hear your feedback and input here.

PrevPrevious5 Smart Moves the City of Seattle Did for their Free-Floating Bikeshare Program
NextThe Bikesharing Trend: Past, Present and Future Overview of Bike Shared MobilityNext